It's fashionable and futuristic while still being functional

The 2023 Nissan Ariya, the electric SUV shown to the American public for the first time at the L.A. Auto Show, will carry a base price of $47,995. That would be more than other, similarly sized electric SUVs, including the VW ID.4 and almost certainly the Toyota bZ4X and Subaru Solterra twins. There are reasons for this. First, the Ariya has a standard range of 300 miles, and although it dips to 285 or 264 depending on trim level/performance output, all are more than those aforementioned choices. Second, after checking out the Ariya in person at the L.A. Auto Show, it has another advantage that certainly warrants a higher price: its knockout interior.

From a materials perspective, the Ariya cabin is a step above what you'll find in the others, and is indeed superior to the similarly priced Ford Mustang Mach-E — which has an above-average cabin itself. It's definitely a step above Nissan's similarly sized gas-powered SUV, the Rogue. As with that and other Nissans, the dash and door tops are covered in a soft, leather-like material, but the door-to-door strip of convincing open-pore wood-like trim does much of the heavy lifting in elevating this cabin to new heights for both Nissan and this growing segment of vehicles. Not only does it serve as a dominant premium visual and tactile element, its slick inclusion of illuminated, touch-operated climate controls are modern and just seriously cool. And true, while we often complain about touch-sensitive vehicle controls (they're truly terrible in the ID.4), these at least seem to be placed far enough apart, are indeed illuminated (unlike ID.4), easily identified, and are kept to a minimum. Also, the wood placement looks so much cooler than the usual piano black plastic application that some functionality tradeoff should be made more acceptable. 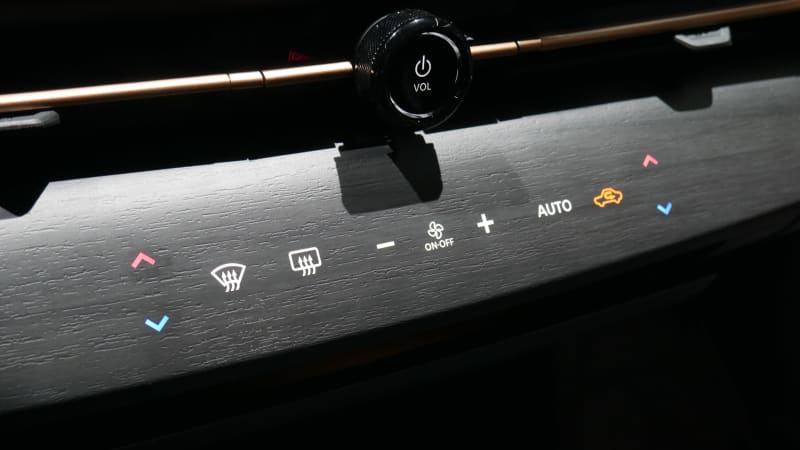 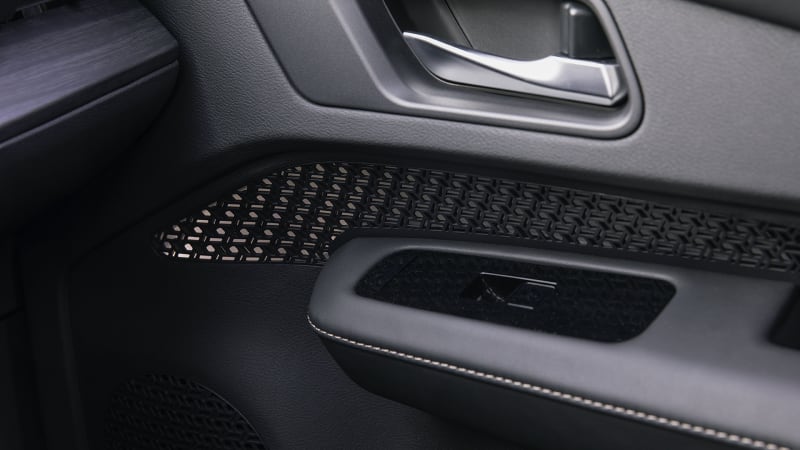 Above that trim is a door-to-door air vent strip bifurcated by bronze trim that will apparently be found in every Ariya — apart from the seat upholstery, everything you see here is found in all trim levels. That bronze color is found elsewhere in similar, metal-like trim on the center console and in the cross stitching. Another trim detail found throughout is the subtle "kumiko" pattern cut into the speakers, secondary cabin vents, door trim and even floor mats. It's in the front fascia's "grille," too. According to Nissan product planner Nathan Sneddon, this consistency of trim is the result of feedback from customers who said that they'd like to see such cohesion and a great attention to detail.

Sneddon also noted that potential EV buyers frequently wanted to know, "Why don't car companies just make an EV that looked good?" The Leaf was obviously doing nothing to change that perception. The Ariya has a much better chance, but unlike its humble hatchback predecessor, it utilizes a new, ground-up vehicle platform specifically developed for EVs that gave designers "free rein to make their ideal SUV." Besides aesthetics, this architecture allows for a long wheelbase and therefore much greater backseat space than would be expected for a vehicle of its footprint. Admittedly, this is common among EVs. It also allows for a flat floor, and like the BMW i3, designers chose to take advantage of that fact by keeping the front passenger footwell completely open from door to door. This creates a sense of openness, plus some extra legroom and a handy place to store your purse (as a personal aside, my mother always loved this feature in her '97 Honda CR-V). This setup may not be for everyone, though, which is where one of the Ariya's other innovations comes in: the power-sliding center console. With the touch of a button (it's to the left of the electronic shifter), it slides back and forth to better accommodate the elbows of different driver heights or just personal preference. If you want a more enclosed feel, bring it forward. If you really love that wide-open floor, send it back.

As for tech, the Ariya has a setup that's unique to Nissan, but increasingly common since the introduction of Mercedes MBUX with a pair of wide displays encased in a single unit atop the dash. Sneddon said that designers as well as customers preferred having information in front of the driver and separate from the infotainment system. Cough, Tesla, cough. Though I didn't play around with the system much, the colorful graphics, easily read icons, docked menu icons on the left side and general structure seem consistent with Nissan's other user-friendly interfaces. The instrument panel display is further awash with information possibilities and customizable layouts, all controlled by the steering wheel, itself a unique piece for the Ariya.

In total, the Ariya cabin looks and feels like a concept car come to life. Designers often talk about such concept car interiors as possessing a "wide-open, living room feel" (just check out the Hyundai Seven Concept, which has an ottoman for Pete's sake) and this one comes pretty close to that. Sneddon likened the infotainment system to the TV and the sliding console to a coffee table. It's not clear what the dog bed or ficus might be. At the same time, the envelope wasn't pushed so far that the cabin's functionality is compromised or just completely foreign. It's fashionable and futuristic while still being functional. It's definitely a reason to hold off on that ID.4 or Mach-E purchase until you get a chance to check out Nissan's impressive entry in this growing segment.