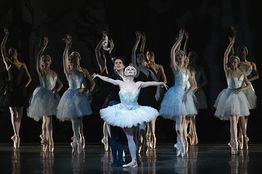 Peter Martins’s staging of the classic is an exercise in too-muchness; Alexei Ratmansky’s premiere offers dancers and dancing in a fresh, oddball light.

Alexei Ratmansky puts a fresh spin on a fantastical work by reaching into its history.

The Alvin Ailey American Dance Theater’s current season highlights contemporary works that struggle to live up to the choreography of the company’s founder.

At the Joyce, the Christmas favorite takes an engagingly unfamiliar form with a soundtrack by Duke Ellington and Billy Strayhorn.

A collaboration between choreographer Pam Tanowitz and pianist Simone Dinnerstein at the Joyce adds a physical dimension to the demanding keyboard composition.

At the Joyce Theater in New York, Spain’s folkloric dance tradition is stripped down to its essence

What Binder Has Brought to BAM

‘William Forsythe: A Quiet Evening of Dance’ Review: A Hushed Deconstruction of Ballet

This uneven work at The Shed is by turns casual and eye-catchingly formal, sometimes with the air of dry choreographic exercises and at other times that of playful, engaging, pure dance.

So far at the Joyce Theater Ballet Festival, astute looks at the Royal Ballet’s past have been the standouts.

‘The Bournonville Legacy’ Review: Excerpts From a Ballet Master

At the Joyce Theater, members of the Royal Danish Ballet perform selections from the elaborate dances 19th-century choreographer August Bournonville created during his decades with the company.

A Company’s Classics Take the Stage

The acrobatic dance-theater group Pilobolus returns to the Joyce Theater with a program that leans heavily on vintage favorites.

Measuring Up to a Master

At Bach Festival, a world premiere by Pam Tanowitz holds the stage authoritatively next to choreographic legend Paul Taylor’s work, while one by Margie Gillis falters.

The New and Newly Revived at American Ballet Theatre

The troupe presents works by Alexei Ratmansky and Twyla Tharp, as well as the American premiere of Cathy Marston’s lengthy ‘Jane Eyre.’

Parsons Dance pays tribute to Paul Taylor as part of its current run at the Joyce.

‘Pepperland’ Review: A Beatles Classic Gets Knocked Down

A series of dance bills from Aussie groups proved to be, at best, of pleasant, passing interest.

A New Era for a Historic Troupe

Now under new artistic leadership, New York City Ballet is ushering in a new chapter in the company’s history.